HOW IT ALL STARTED...

''I think this is the beginning of a beautiful friendship."

It was 1998. The love of my life and I were on our way to an exotic destination when a twist of fate took us to New Orleans. During our time in the South, we spent some amazing days in the Mississippi Delta. We also visited Oak Alley Plantation, one of the many historic homes in the area. It was an impressive visit. Partly because of the old trees of Oak Alley, which appear to bow to you as you walk along them towards the beautifully situated mansion with a history that still needs to be told..

We were not the only ones impressed by Oak Alley. That became clear that evening when we unsuspectingly watched the recently released movie Primary Colors in a local cinema. Suddenly it was there, the same path, the same house, the same beautiful trees. The movie had a key scene with John Travolta and Adrian Lester, but my mind kept going back to that afternoon when we were standing in the same spot as the actors in director Mike Nichols's new movie. 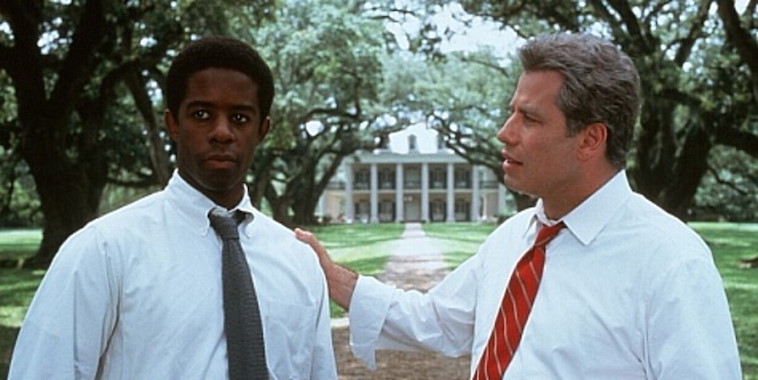 I think it was there and then that the seed was planted of the idea of revisiting movie locations during the vacations to come. Yes, to even plan our holidays because of the movie locations I wanted to visit. And even try to find a way to do something creative with it, because I work in the Dutch cinema industry. That's why I like it so much that I was asked to write this quest blog for Sceen-it.com.

Over the years, the enthusiasm for movies and the locations has brought me and my family to lots of places. For example, to Almaria in southern part of Spain to look for the McBain farm from Once Upon a Time in the West. And all the way to Monument Valley, where the remains of the iconic arch from that same Sergio Leone movie can still be found just a stone's throw away from the amazing valley (close to Forrest Gump point).

The hobby that got out of hand also took our family to Martha's Vineyard to visit the Jaws sites, to Scotland to hear the silence of the Skyfall valley, and even to Hawaii to get to see the amazing Kualoa Ranch starring in the Jurassic Park franchise. And to cities like Paris, London, Salzburg, Dunkirk, Dubai, Bangkok, Chicago, San Francisco and New York to see movie sets come to life. And I know I am definitely not the only one (and no, my family does not seem to mind that I take them to all those wonderous places).

Sceen-it.com not only became a great way to find and add movie locations and create a want to see list, but also to connect with nice people and share memories. I have found that out during a recent trip to San Diego to spot a couple of Top Gun locations (including some from the long-awaited sequel).

And also during a really wonderful visit to the United Methodist Church in La Verne in California (the one from The Graduate). We were welcomed with open arms by the charming Janice Stearns and Ben Pangilinan who showed us around and shared some great stories. I truly hope there will be lots of other meetings like that one. If not in the real world, then maybe virtual. See you on Sceen-it.com?