'I don't believe this. Didn't any of you read that memo?'

I don't know if you've already seen it, but when I first saw the making of video of The Madalorian some time ago I was just blown away. The impact of this technological innovation is going to be be huge. I can see that. But I am also wondering what it will mean for shooting on location.

For The Mandalorian, Lucasfiilm and Disney used these amazing LED screens and technology developed for video games to create amazing, moveable sets in a studio setting. No more actors with a green screen in the background, but a moving background that makes even the actors believe that they are on location.

Filmmakers have always tried to make their movies look as realistic as possible. Because they want us to believe what we are seeing. Even if they take us to worlds that don't exist, like in The Mandalorian. Fortunately, there have always been these incredibly creative production designers, location scouts and special effects guys who were capable of the unimaginable. But even they were sometimes limited by technical boundaries. 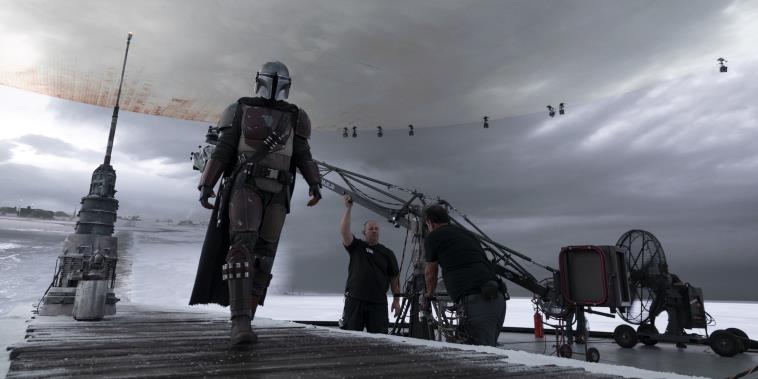 Take driving in movies. You are probably familiar with those old films in which the main character is pulling the steering wheel wildly while moving images are projected in the background. This Rear Projection is still used. In fact, The Madalorian uses a technique that sort of imitates it. But in the late 60s a lot changed.

In 1968 the Arrifex 35mm camera was used for the first time in a major Hollywood production. It was mounted on and in the Ford Mustang GT that Steve McQueen drove in Bullit. That technological leap allowed McQueen and his stunt double Bud Ekins to drive the streets of San Francisco like we never saw before. To this day Bullit is still known as the movie with one of the best car chases ever. And it was filmed on location!

Another groundbreaking technique that has helped filmmakers immensely is chroma key compositing. I can try to explain it in detail, but in this video (about Disney's Mary Poppins) it is done so well I can only recommend you to watch it. The point I am trying to make is that it did not result in all movies being shot in studios. No, the green and blue screens appeared on location to cover things up and edit them in post-production, like they did in Game of Thrones and is shown so wonderfully in this video.

If you let all this sink in a bit, you might conclude that all sets will be created in the computer in the foreseeable future. And that streets, squares, parks, historic buildings, bridges and beaches are no longer needed as a location.

But is that really the future? It looks impressively beautiful and it offers unbelievable opportunities, but I still think history has shown that proven techniques such as matte painting (like they used in Planet of the Apes) and the usage of miniatures (like the ones in Casino Royal) are here to stay. Because they work so well.

In addition, producers are still persuaded to film on location because it offers them financial benefits. And for cities, states and even entire countries it is attractive to act as a backdrop. It creates jobs during production, and months and even years later when the crew has left the set and fans like you and me bring in money when we come to visit the locations from movies and series we love so much.