JUST AROUND THE CORNER

'This going to be an emotional roller coaster.'

We all know Woody Allen's Manhattan is really a love song to New York's most famous borough. And that La La Land makes Los Angeles shine in a way we had not seen in a long time. Roman Holiday made us want to go to Rome, just like The Devil Wears Prada still makes us want to visit Paris. Some movies are the best travel brochures a city can wish for. Some films take it even a bit further. When it is set and filmed in a particular neighbourhood it creates a connection between the two that lasts forever.

There are quite a few films that take place - for the most part - in only one location. Sidney Lumet for example set his brilliant courtroom drama 12 Angry Men in one room, Roman Polanski placed his 2011 movie Carnage in an apartment and Alfred Hitchcock created such a tense scene in Jimmy Stewart's living room in Rear Window that you have no nails left when the end credits start to role. But these are all studio productions.

Spike Lee's Do the Right Thing from 1989 has to be one of the better examples of a sort of one-location movie. The movie is a true classic for several reasons, but also because everything was filmed on location on a stretch of the street no longer than 350 feet. Twenty-five years after the film's release, Spike Lee returned to the Bed - Stuy neighbourhood to revisit the locations one by one. It resulted in a video really fun to watch. In that same year, in 2014, Stuyvesant Avenue between Lexington Ave and Quincy Street in New York City was renamed Do the Right Thing Way to pay tribute to the movie classic (Google Street View).

It takes you no more than fifteen minutes to visit all the movie locations from Do the Right Thing. This does not really apply to the locations in Downtown LA Marc Webb used for his lovely movie 500 Days of Summer starring Joseph Gordon-Levitt and Zoeey Deschanel. Many of the area's locations - like the breathtaking Bradbury Building, the Million Dollar Theater, the lively Grand Central Market or Angel's Knoll (next to La La Land's famous Angels Flight Railway) - are still within walking distance of each other. Believe me, it is a wonderful 500 Days of Summer Walk.

Please do not forget to have Daryl Hall and John Oates close at hand as you walk through LA's Grand Park towards the fountain. Chances are you can't hold back when you listen to their "You Make My Dreams Come True" in the park. A fun fact is that movie director Marc Webb wanted Hall and Oates to star in the energetic dance scene. John Oates was supposedly up for it, but Daryl Hall dropped out because he thought they were making fun of him.

Another neighbourhood (only 5,500 miles east of LA), where you will find some of the main locations of a charming, optimistic and beautifully shot movie within walking distance, is in Montmartre in Paris. The movie is Amélie Poulain, or as the French say Le fabuleux destin d'Amélie Poulain. The movie is celebrating its 20th anniversary this year. It was a worldwide success when it was released in 2001. It won four French Césars and five Oscar nominations and put the charming neighbourhood on the north side of Paris back on the map. In some countries the film is even known under the title Amélie from Montmartre.

Especially in the years immediately after the release of the movie, there was a true Amélie effect in the neighbourhood. The owner of Café des deux Moulins actually wanted to sell his café but decided otherwise because his café became hugely popular. The grocery owner just around the corner kept some of the props to show to his customers. Director Jean-Pierre Jeunet was even accused of raising house prices in the charming neighbourhood. 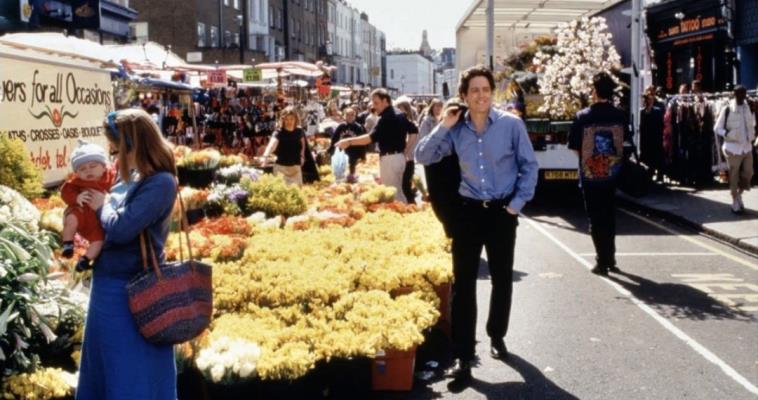 The highlight of the Amélie Montmartre walk, should you ever take it, is without a doubt The Basilica of the Sacred Heart of Paris, commonly known as Sacré-Cœur. This magnificent basilica, which dates from 1875, is really too beautiful to ignore (Google Street View).

The movie that had an impact on a neighbourhood like no other is without any doubt Notting Hill. Richard Curtis's romantic comedy starring Hugh Grant and Julia Roberts may be 22 years old, but it continues to conquer the hearts of viewers worldwide. The guys at the fundraising initiative Omaze also realized this. That's why they came up with the great idea to raise money for Red Nose Day three years ago by asking Hugh Grant to host an true English tea in Notting Hill (video). 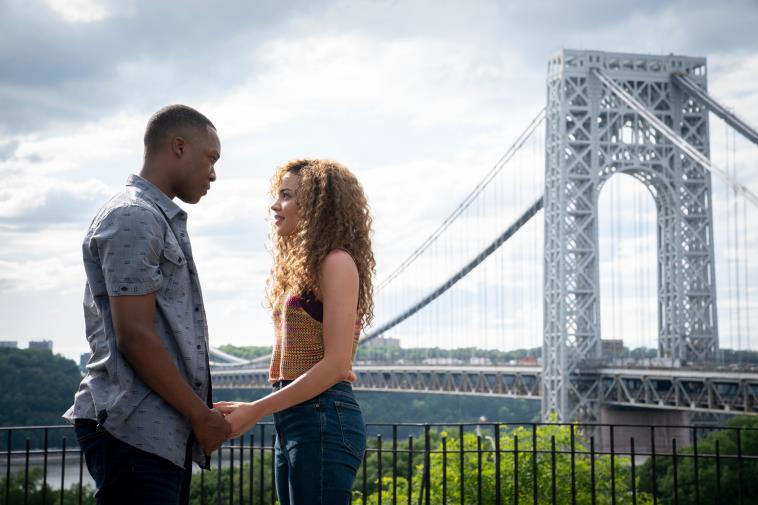 In the Heights photo Warner Bros

Before the corona crisis tourists from all over the world visited the popular neighbourhood because of the movie. There are right to do so because Notting Hill still exudes the atmosphere of the movie after all these years it. Like nothing has changed. Fans can still visit almost all locations from the movie. Even the door at 280 Westbourne Park Road is still blue. And Google Street View shows how popular that door is (Google Street View).

The reason for this blog is that there is another movie that will put an entire neighbourhood on the map. And it will be released this summer. In the Heights is the energetic and emotional movie adaptation of the 2005 musical of the same name by musical talent Lin-Manuel Miranda. The movie (and musical) tells the story of a group of residents in The Heights, the neighbourhood on the north side of Manhattan. The movie was filmed on location in the summer of 2019 and most of the locations are within walking distance.

Although we only have the trailer the look at, there are sufficient indications that The Heights will be the place to visit in New York once we are allowed to travel again. I cannot wait...

Do the right Thing